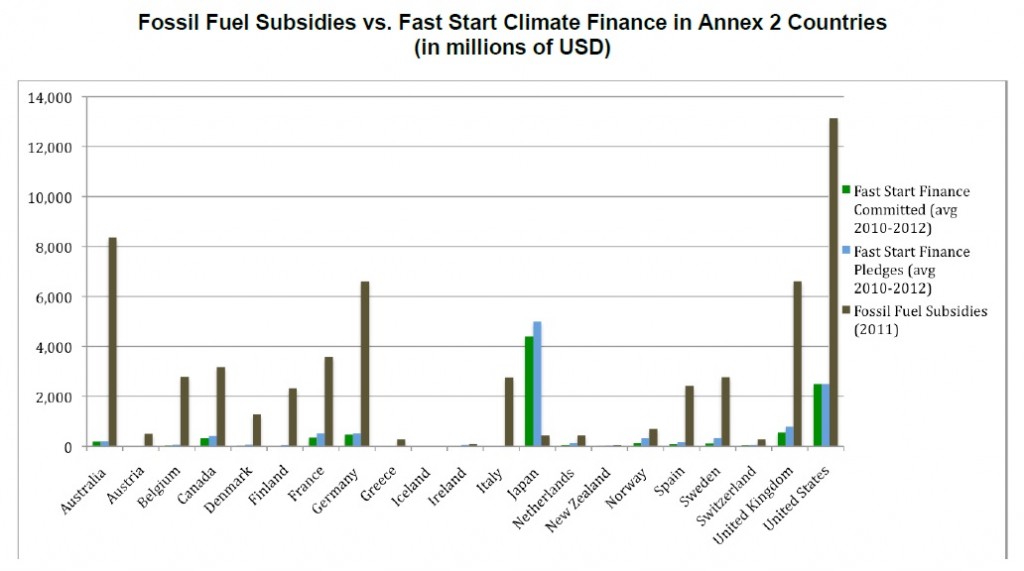 In 2009, world leaders at the G20 summit agreed that phasing out fossil fuel subsidies should be a top priority. Three years later, with very little progress on actually repealing those subsidies, promises for reform ring hollow.

Now, as diplomats gather in Doha, Qatar for an international climate summit — an event that experts say will bring very few meaningful commitments — groups are stepping up the pressure on fossil fuel subsidy reform.

Rich countries spent $58 billion on fossil fuel subsidies in 2011. That’s roughly five times the amount they spent on “fast start” financing for climate adaptation and mitigation in developing countries, according to an analysis released today at the Doha climate talks by Oil Change International.

Established at the Cancun climate talks in 2010, fast-start finance is designed to help the most vulnerable countries fund renewable energy, efficiency, water access, and climate change adaptation projects. The goal is to raise $100 billion a year for these projects by 2020.

The Oil Change International analysis is derived from OECD figures on fossil fuel subsidies and World Resources Institute data on international commitments for climate-resiliency projects in developing countries. It found that the average yearly commitment from developed countries for climate financing over the last three years was $11 billion — a fifth of what they spent to support the fossil fuel industry.

“What this analysis shows is that governments gathered in Doha to supposedly fight climate change need to put their money where their mouths are,” said Oil Change International’s Executive Director Stephen Kretzmann in a statement. “It should be plainly obvious that you can’t solve a problem when you’re spending vastly more to continue creating it than you are to fix it.”

Fossil fuel subsidies have become an important fight in the climate advocacy world. With very little movement on an international plan to price greenhouse gas emissions, campaigners are now pushing countries to drop their support of dirty energy. But progress in this area has been stubborn as well. Although the issue is widely discussed in international negotiations as an option, there is very little appetite within individual countries to repeal subsidies for coal, oil, and gas.

Even the International Energy Agency — an organization set up in the 1970′s to counter the power of OPEC in the oil markets — strongly agrees that fossil fuel subsidies must be eliminated in order to seriously address climate change.

As international climate negotiators enter their second week of talks at COP 18 in Doha, the need to rapidly transition to a more secure, sustainable global energy system is more urgent than ever. IEA analysis shows that achieving the internationally agreed climate goal of limiting warming to 2 degrees C is becoming more difficult and more expensive with every passing year. Without concerted action soon, the world is on track for a much warmer future with possibly dire consequences. In fact, announced policies could lead to an increase of 3.5 degrees C. An increase of this magnitude could trigger widespread melting of the permafrost in Arctic regions with unpredictable results.

Clearly, carbon emissions must be dramatically reduced and the energy sector must play a key role in this. In the short term, the IEA strongly encourages all governments to enact policies that promote the rapid deployment of energy-efficiency technologies; this would reduce greenhouse gas emissions and buy time to secure a much-needed global climate agreement. Strategies to “unlock” and reduce emissions by retiring high-carbon-emitting facilities must be implemented cost-effectively and equitably. Governments must develop sound domestic policies to encourage low-carbon investment, especially in emerging economies where most energy growth will take place. Measures that encourage inefficient use of energy, such as fossil fuel subsidies, must be eliminated.

In the U.S., the fossil fuel subsidy issue may again take center stage. During the campaign, President Obama called for repealing $4 billion in yearly tax breaks for the top oil companies. Some conservatives in Congress say they’re willing to consider getting rid of tax subsidies for oil producers as part of a bargain in a budget deal; however, they’ll likely want to see an end to tax support of renewable energy as well.

In an attempt to take the fight outside the paralyzed political system and straight to the fossil fuel companies, U.S. climate activists are also rolling out a campaign to encourage schools and universities to divest from the coal, oil, and gas sectors.