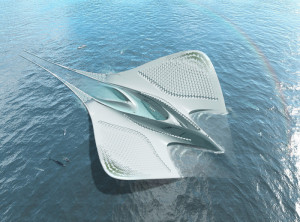 French architect Jacques Rougerie has designed a futuristic floating city that, if carried out, could be completely self-sustainable.

City of Mériens is a striking floating city that strongly resembles a Manta ray.

Rougerie, who describes himself as a "pragmatic dreamer" said he has always felt a special connection to the sea. In a 2014 interview with France Inter, Rougerie said:

"I feel very, very good underwater. I feel different. Another type of imagination is awakened in me as soon as I am underwater."

Mériens is a word coined by Rougerie to describe people who "belong to the sea." The architect envisions City of Mériens being filled with these types of people.

The 3,000 foot long "university city" would house 7,000 individuals and will be used to conduct ocean research. The city will be equipped with classrooms and laboratories for students as well as living spaces and room for leisure activities, including sports.

This is not Rougerie's first venture into futuristic aquatic architecture. His SeaOrbiter, a massive submarine vessel that is currently in production, is planned to make trips to Mériens via an inner lagoon.

Rougerie designed the floating city to be completely sustainable and autonomous. Mériens would completely rely on marine renewable energy to survive and produce zero waste.

The French architect hopes that others will study and protect the oceans just as he has done in the past.