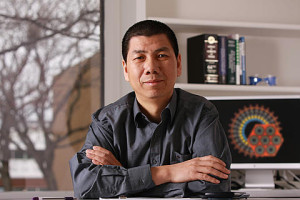 The Department of Energy national laboratory named materials scientist Jun Liu Inventor of the Year for his work developing battery materials that can store large amounts of energy, ease impacts to the electrical grid, and reduce the time it takes to charge cell phones, electric vehicles and other battery-powered devices.

"As a national laboratory we continuously strive to move new technologies into the marketplace so others can benefit from federal investments in research," said Technology Deployment and Outreach Director Cheryl Cejka. "In 2012, PNNL researchers responded by accelerating commercialization and innovation that protects the nation and the environment, and increases our energy capacity."

Liu received four U.S. patents in 2011 and 2012. During the same time, he contributed to 25 additional U.S. patent applications and filed 17 invention reports related to battery innovation. Since joining PNNL in 1993, Liu has received 43 patents and written or co-written more than 300 peer-reviewed journal articles.

"By focusing on the fundamental science and obtaining insights for different energy storage systems, Jun and his colleagues have pushed the frontiers of batteries from conventional lithium-ion batteries to high-capacity redox-flow systems and cutting-edge lithium-air batteries," noted Cejka.

Ninety-six PNNL staff were recognized for receiving 42 U.S. patents for advancements in analytical instrumentation, bio-based products, electricity infrastructure, energy storage, fuel cell and information system technology, materials processing, microtechnology and sensors. Since PNNL's inception in 1965, staff have received more than 2,200 U.S. and foreign patents with more than 500 of those issued in the past five years.

PNNL honored 26 staff for developing and commercializing four software products in 2012, and another 38 staff for their contributions to the development of innovations that resulted in two R&D 100 Awards and two Federal Laboratory Consortium Awards.

In addition, PNNL acknowledged 62 staff members for making key contributions to the creation, development and commercialization of five technologies and one software suite of products that were licensed to private companies the previous year. The commercially available products enhance the ability to sort through vast amounts of information, the delivery of medical radiogels and isotopes, and the sensitivity of analytical instruments. They also have led to the creation of batteries that hold promise for storing large amounts of renewable energy and providing greater stability to the energy grid.

Last, but not least, PNNL recognized three staff with Distinguished Inventor of Battelle awards, which go to Battelle staff at PNNL and worldwide who have received 14 or more U.S. patents for their work. Staff members Michael Lilga, Kerry Meinhardt, and Keqi Tang joined 21 previous Distinguished Inventors from PNNL, including Liu, and 60 others worldwide.