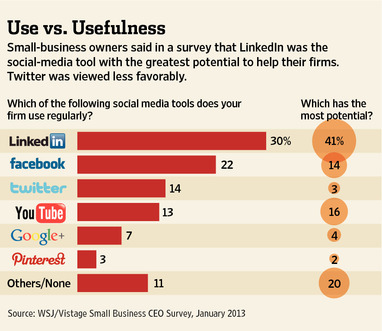 Six out of 10 small-business owners say they believe social-media tools are valuable to their company's growth—but most aren't impressed by Twitter Inc.

Just 3% of 835 business owners surveyed earlier this month by The Wall Street Journal and Vistage International said Twitter had the most potential to help their companies.

The findings illustrate the challenges facing Twitter in demonstrating to small-business owners the benefits of using the short-messaging service to reach customers. Twitter says it is just beginning to court small businesses, which make up the bulk of U.S. companies, and are an important revenue source for many tech giants, including Google.

Three years ago, the 47-year-old Mr. DeMann began using Facebook and Twitter to market his service and, in 2011, he designated one of his 78 workers to spend 20 hours a week on social-media efforts, generating health discussions on Facebook and highlighting health tips and articles on Twitter.

In 2012, Mr. DeMann says, Facebook was the sixth-largest driver of online traffic to his website. Online scrapbook Pinterest, which the firm started using just four months ago, was 59th. Twitter ranked 117th. "On Twitter, you can't engage in a meaningful way," he says.