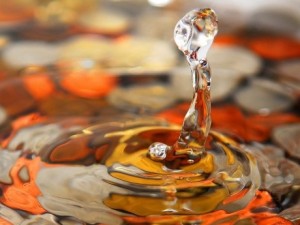 1. Water is the main limiting factor for humans, that means the resource which will lead to the end of the population growth. Even if – unlike other resources – the amount of water is kept constant, it is divided by more and more people, with increasing consumption. Already, the global average consumption is of by 50% from the resources.

2. The next world war, if there is going to be one, will probably start from the water matter and the hottest spot on the planet is the vicinity of India and China. The Chinese are already making extensive hydraulic works that will allow, if necessary, to stop the flow of streams in the neighboring country.

3. The price at which the water is now selling is way below economic value because there are still plenty illusion. When water scarcity becomes constant, the rule is that the price must  increase accelerated, even with a double-digit growth every year.

4. It takes two to five tons of water to produce the food of one man for one day. For a pound of meat should be consumed 16 tons of water. For a pint of beer should be 75 liters. For one tomato – 13 liters in classical agriculture or the tenth part with hydroponic technology.

5. Romania is at Europe's tail on water resources: less than 2000 cubic meters per capita per year. We don’t sit so well as we like to think at the mineral waters chepter either. Exploitable resources are less than 1.5 liters per capita per day. In total – 26 million liters: half flat, half bubble. Therapeutic instead … a lot.

6. In Romania, the most severe droughts were in 2000 and 2003. The famous drought "from '46” is only on the fifth place. The reason why postwar drought was accompanied by famine was that the peasants were successively robbed by the Romanian military, then by the Russians.

7. Irrigation can double production, but that does not automatically make them economical in all the terms of cost of electricity or harvest price. USA, with one of the most productive agricultural sectors, has only 15% of irrigated arable land. Romania dropped two decades ago to 30%.

8. For years a myth is circulating that the irrigation with water from the groundwater should be prohibited. In reality, the operation is allowed for a fee paid to the "Romanian Waters". Even pumping oil may prove profitable, because in prolonged drought conditions may be the last chance to save the crop.

9. Even in a dry year, the losses can be minimized if the plan is made ​​by a crop agronomist who didn’t skipped classes and read something besides. He must juggle the proportion of autumn and spring crops, to synchronize the water loving plants with the ones who do well with less, or to stay with an eye on the stock market quotation and on soil fatigue with the other.

10. How do others solve their problems? Here are two examples of poor-resource countries: In Malta, a network of tunnels gathers water from aquifers located 100 meters below the island. In Cyprus, 100 dams collect rain fell in a single season to get even with five dry years.