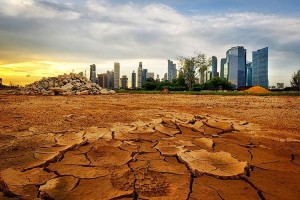 In May, Last Week Tonight host John Oliver attempted to visually demonstrate what a true debate on climate change should look like.

Instead of bringing out one expert on either side of the issue, Oliver brought on set 97 scientists who support evidence that humans are causing global warming to argue with three climate skeptics—“a statistically representative climate change debate,” he said.

The sketch was based on the “climate consensus,” the notion that 97 percent of climate scientists agree that global warming is occurring and that humans are part of the problem.

But if Oliver really wanted to be up-to-date on his stats, he would have put 99.99 scientists on one side of the desk.

That’s according to James L. Powell, director of the National Physical Sciences Consortium, who reviewed more than 24,000 peer-reviewed scientific articles on climate change published between 2013 and 2014.

Powell identified 69,406 authors named in the articles, four of whom rejected climate change as being caused by human emissions.

That’s one in every 17,352 scientists. Oliver would need a much bigger studio to statistically represent that disparity. 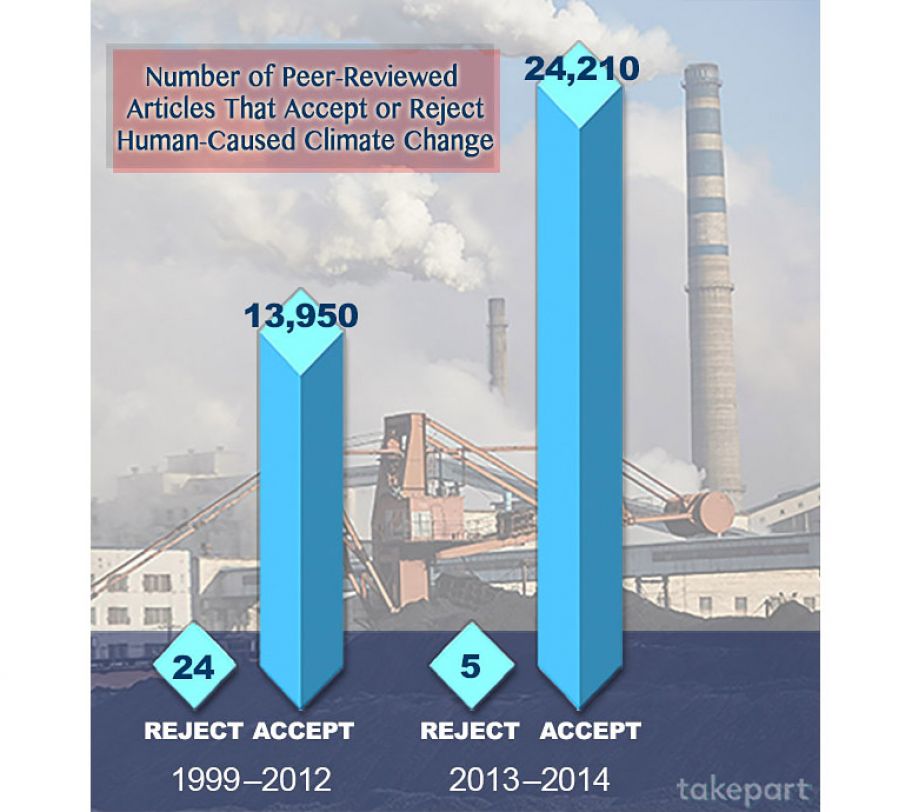 “The 97 percent is wrong, period,” Powell said. “Look at it this way: If someone says that 97 percent of publishing climate scientists accept anthropogenic [human-caused] global warming, your natural inference is that 3 percent reject it. But I found only 0.006 percent who reject it. That is a difference of 500 times.”

To obtain his figures, Powell—a member of the National Science Board under Presidents Ronald Reagan and George H.W. Bush—reviewed the abstracts of 24,210 papers, searching for key words such as “global warming,” “global climate change,” and “climate change.” He spent nine months reading titles and abstracts, finding only five articles (two from the same author) that clearly reject human-caused global warming or give another explanation for the rising temperatures.

The paper isn’t in the public domain yet, but Powell has sent it in to a peer-reviewed journal for publication this summer.

So, Why Should You Care? Powell said correcting the commonly held climate consensus number of 97 percent to 99.99 percent is just one more step in the process of ending the climate debate.

“Publishing scientists are virtually unanimous: Anthropogenic global warming is true,” Powell said. The quicker we understand that, he said, the quicker we can agree on the importance of cutting carbon emissions, which influence global temperatures, sea-level rise, long-term health, and the world’s food supply.

But try telling that to large portions of Americans—a third of whom believe that global warming will either never happen (16 percent) or will not happen in their lifetime (17 percent), according to a March 2015 Gallup poll.

Read the Pew Research Center’s January survey, and the divide between the scientific community and the general public on climate change appears even wider. The survey asked members of the American Association for the Advancement of Science and the general public if they believed the Earth was getting warmer owing to human activity.

Powell said he wasn’t surprised to find the large disparity between those who reject and accept climate change in the scientific publishing world. He knew that in 2004 Naomi Oreskes, professor of the history of science at Harvard University, had reviewed 928 abstracts of articles on global warming, finding none that rejected it.

“Scientists have done so much more work since then,” Oreskes told MSNBC. “For me, as a historian of science, it really feels like overkill. One starts to think, how many more times do we need to say this before we really get it and start to act on it?”

Oreskes coauthored the book Merchants of Doubt, which looks at how industry interest groups have placed “science experts” in different fields to deceive the public on issues such as tobacco, pharmaceuticals, and climate change. Her 2004 research was the first to find a consensus on climate change. Powell’s work is just the latest to strengthen that argument. (Disclosure: The documentary Merchants of Doubt, which is based on Oreskes’ book, was produced by Participant Media, TakePart’s parent company.)

“Many people evidently feel that they can accept the findings of science that they agree with and reject those that they find offensive or inconvenient,” Powell said. “But it doesn’t work that way. Science is of a piece, all fitting together like a beautiful tapestry. To say that climate scientists are wrong is to say that all these fields are wrong and therefore science itself is wrong. But if it were, nothing would work. People can’t have it both ways.”