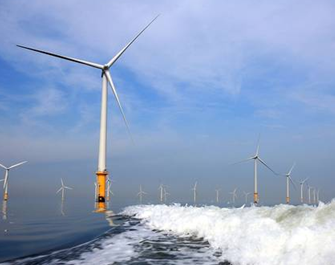 Britain’s “dash-for-gas” strategy has been undermined just a day before chancellor George Osborne is set to place the fossil fuel at the heart of UK energy policy, as a new report finds the economy would be better off harnessing offshore wind instead.

The British economy would be £20bn-a-year better off by 2030 if it favoured offshore wind over gas-fired generation as the driver of an essential overhaul of the country’s energy infrastructure over the next two decades to replace aging power plants and keep the lights on, according to Cambridge Econometrics, the think tank.

Paul Elkins, professor of resources and environmental policy at University College London (UCL) said: “Much of the debate around the choice between gas-fired and offshore wind electricity generation in the years post-2020 assumes wind is more expensive. This study represents powerful evidence to the contrary.”

The report calculates that, as well as increasing Britain’s gross domestic product by 0.8 per cent by 2030, carbon emissions from the UK’s power sector would be two-thirds lower under the wind-based scenario, bringing country’s overall carbon footprint down by 13 per cent. This would make Britain far more likely to meet its ambitious, legally-binding target of reducing its overall emissions by 80 per cent by 2050, compared to 1990 levels.

The report envisages a rush into offshore wind between 2020 and 2030 that would triple the amount of energy it generates to 38 per cent of the UK’s electricity supply.

It also considers a parallel scenario, where wind development ceases in 2020 so that it accounts for just 10 per cent of the electricity supply ten years later, with gas generation makes up the difference and accounting for 36 per cent of the total generation.

The report focuses on the period between 2020 and 2030 because Britain’s energy strategy peters out around the end of this decade. This has happened, in large part, because Mr Osborne successfully lobbied to have a target that would have made British electricity almost entirely green by 2030 taken out of last week’s energy bill.

“A spokesman for the Department of Energy and Climate Change said: “We need a balanced low-carbon energy mix. That means new gas, plus renewables, new nuclear and carbon capture and storage technology, to meet our climate targets and ensure security of supply.

“The Gas Generation Strategy will set out the important role that gas generation will play in any future generation mix, in supporting a secure, low-carbon and affordable electricity system.”